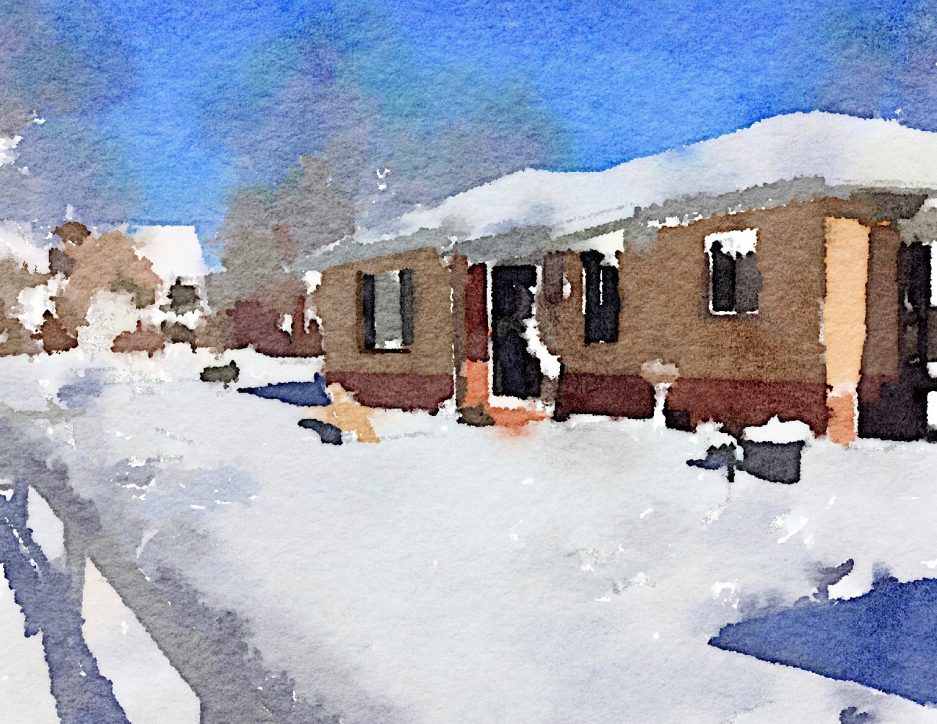 We had hospital duty over the weekend and you know what that means…a bath for the “Muppet.” Cue the scary music…dum, dum, dum. Poor Sam, have you ever seen anything so pitiful looking?

Can’t you just practically hear that tiny little voice from the movie The Fly?  I nearly wet myself laughing at his pitifully sad, drowned-rat expression. To get even at my laughing, he shook water all over me, twice. 🙁

What a difference a couple of hours makes! Such a handsome boy and you could see from his prancing around, he was thinking he’s a real dandy. Well, YOU can’t actually see it, but trust me on that–he was doing the happy dance prancing all over. 🙂 He was so soft and fluffy, like a big dandelion. A couple drops of an essential oil blend later (clove and vanilla-my current favs) and W-O-W, he smelled just fabulous on top of it!

So off we went to hospice where Sam’s favorite nurse, Ann was back (yay!). He was so glad to see her and immediately started loping toward her so he could do the ‘lean’ against her leg. She laughed and said how much she’d missed him. It’d been a couple of months since we last saw her and Sam had missed his favorite nurse.

Hospice was filled with loads of people visiting loved ones–I’d never seen the parking lot as full before. When we first walked in, there was a sobbing young girl near the lobby entrance, perhaps 6 or 7 years old with her mom who was trying to comfort her. Sam’s ears pricked up as I logged us in and he immediately pulled toward her. He’s super sensitive with crying kids and I knew it was upsetting him that this little girl was so crestfallen. He walked up and pushed his noise under her elbow between her and her mom. She turned and laid her hand on Sam’s head and began petting him. His tail started that furious, crazy wag and she stopped crying (her mom smiled, mouthing “thank you” toward us). Sam must have thought his job was done there because he turned to leave and encountered an older fellow who was sitting nearby reading a book. As he began to pet Sam, a family came by and oohed and awed and from then on Sam was in 7th heaven with people. The family asked all about him, “What’s his name, how old is he, is he a poodle or a doodle, how’d you get him so soft?” The usual small talk. I answered their questions and then the fellow reading his book chimed in that he’d never seen a big poodle. We all chatted for a few more minutes about poodle size and other sundry stuff and then Sam and I went to check in at the nurses desk. Sam had begun working his therapy mojo making people smile.

Our first visit was a rarity-the patient was quite conscious and chatting with this sister. “John” reached out to shake my hand and held it firmly, with clear eyes locked on mine. This wasn’t what I expected from a hospice patient. Sam wanted to get in on the action so we put his front paws up on the bed next to John. His sister was so taken with Sam and he with her because he immediately got down from the bed and went to her side which was where he stayed most of the rest our fairly lengthy visit. Sam senses when someone needs him and clearly she did.

John was one of the most charming and delightful humans I’ve ever met. It was hard for me to see this lovely man in hospice especially since he was probably around my age. I just wanted to hug him and take him home with me. Even the nurse said they were all going to miss him very much when he left. He was one of those kinds of people who impress you with their genuine spirit and lovely demeanor. He talked about when he raised Angora goats and we smiled at all his stories. When we finally left his room, I was profoundly affected. It is so rare that I get an up close and personal idea about a patient and their life first hand but this visit I found a light that shined from within this gentle man’s spirit.  He will indeed be missed not only by his family but by those of us who recently had met him. When it came time to leave, he again firmly took my hand and repeatedly thanked us for visiting. He wished us well. A life can be defined by those who greatly impact it. While it was a chance encounter, I am much richer for making John’s acquaintance. I can only hope we made as much of a difference to him as he did for us. I know that Sam had impacted his sister, and just hoped our visit did the same for John; he truly deserved that much.

No sooner had we left John’s room but we visited with the same family we encountered when we first walked in. Their mother was the patient and although she was sleeping, the son asked if we’d put Sam’s feet next to her so they could let her hand touch him. When I put his feet up, the son tried to wake her to no avail and rather than pull away, Sam completely relaxed and sank deeply onto the bed. The grandson lovingly took his grandmother’s hand and stroked Sam’s head. It was sweet seeing these men in a tender moment and Sam was a great therapy ambassador.

Shortly thereafter a woman came running after us to see if I’d bring Sam by for a few moments. We always accommodate requests whenever possible and Sam happily strolled in, ready to be the center of attention. They all fell in love with Sam and he made the rounds with each person. We answered all the questions about him and he ended up laying next to the most vocal in the group, a daughter. She was so touched by Sam’s response to everyone that she reached down and hugged him mightily, saying how she just loved him.

This kind of interaction always deserves a treat which I bring to keep Sam fully engaged while he’s working. Normally, he either doesn’t understand the concept of tricks for treats, or he thinks he’s cute enough not to have to perform them. The only ‘trick’ he will do on command is to lick his chops when a treat is offered. Trust me, I have no idea where he picked that up-as I’ve said many times before, this dog, sweet as he is, is about as dumb as a stump! He’ll lick the left side and when I say “can you lick the other side?” he promptly licks the right side. It cracks me up every time and he always impresses patients and visitors. Right on cue he sat like a prim and proper gentlemen and when I asked him to lick his chops, he did it twice, alternating each side when prompted. The family absolutely loved it, Sam loved his treat and we all smiled. It was that way the entire weekend, great connections with wonderful people and lots of shared smiles.

Normally after our sessions, Sam is pretty wiped out. Being such a good boy and absorbing all that negative energy for even a few minutes can take a real toll on his energy level and he will fall fast asleep when we get home. Gotta love the one paw hanging out there. He never even stirred when I got up to grab the camera. My buddy was a super star this weekend and I couldn’t have been any prouder of his hospital work. Care to share any proud moments of your ‘pawsome’ pet?

15 thoughts on “From pitiful to ‘pawsome’”

© 2014-2019 Sharing is caring but please provide full attribution to Tails Around the Ranch with appropriate and specific reference to the original content.