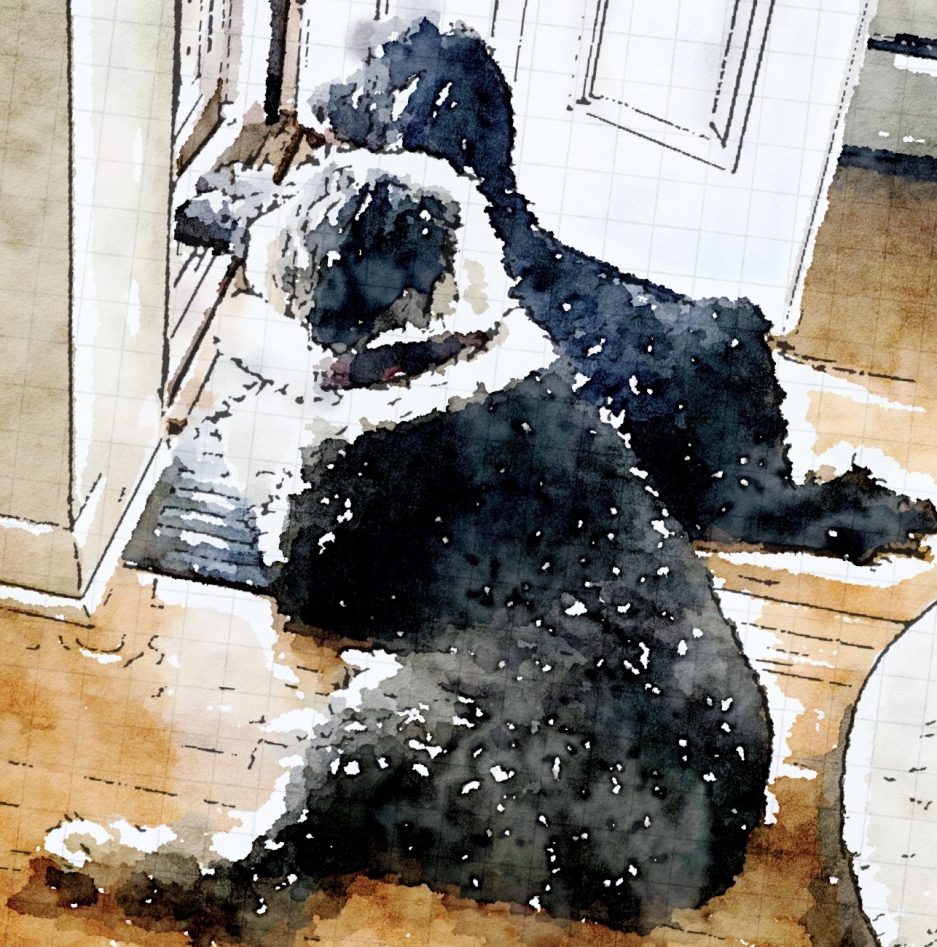 We hope you didn’t eat yourself into oblivion yesterday and your celebration was civil, tasty and shared with friends and family. Because of the snow storm that dumped a foot of snow on the Ranch, ours was a quiet one, even if chilly. As we always do, we’re joining our furiends, Rosy and her brothers from LLB in our Backyard for this episode of the Nature Friday blog hop.

When there’s a foot of snow on the ground, traveling around to enjoy Mother Nature isn’t always easy yet the Knuckleheads still demand outside time no matter what the weather is like. Pity the fool who thinks they can assuage cabin-fevered poodles into not being complete jerks. It’s during those times when the clock seems to stand still in a poodle’s mind which can lead to episodes of mirthful mischief…and even active indoor playtime just won’t cut it. We. must. go. out. Mom. NOW! Enter technology so the huMom can safely take your Highnesses out for short walks to satiate any bored poodle minds.

Warm boots, Sasquatch thick gloves, down coat, wool socks with multiple layers for warmth are a mom’s weaponry in managing the elements. And coincidently, for the most part, many of those same items work to keep tender poodle toes and noses safe and warm. Not that they appreciate it mind you, they will take every opportunity to make preparations for an outing as challenging as possible. The newest weapon in taking on Mother Nature are SnowTrax™ and they proved quite suitable for staying upright on our outings. They are much better than the YakTrax™ previously used. I especially liked the Velcro straps that keep them tethered to the shoe. Nothing worse than realizing you’ve ‘lost’ one, especially when it’s way behind you, and all you want is to hurry and home to warm up.

The first outside moments mimic some Maypole mayhem. One strike against thick gloves is you can’t easily juggle multiple leashes from behind you or poodles’ desire to not be easily corralled.

Once ‘we’ figured out that everyone had to go in one unified direction, we were off on the neighborhood Iditarod trail…otherwise known as the Tundra of unshoveled walks.

Packed down icy and/or deep snow can be a challenge to staying upright. The SnowTrak™ really made a difference though it may take a while to get used to how they feel (think walking barefoot on bumpy, round stones). Compared to the alternative, they beat slipping and/or falling.

I had to really try to keep the Knuckleheads from turning me into a human kite. Elsa LOVES the snow and dashes like a jack rabbit whenever she can through the deeper parts. Let’s just say she isn’t as thrilled with the way her boots worked or the dead weight on the end of her leash.

I can’t be sure all the dressing/undressing is worth the trouble for a quick stroll around the block when we’re used to a walking a couple of miles per outing but then it beats constant barking, extreme nose nudging and other annoying peskiness. Another storm is expected to arrive later today so we’ll try to get in some more outdoor time before it hits. Tired poodles are much nicer to be around. I’m hoping the multiple in-out preparations might burn some of the calories ingested during yesterday’s Thanksgiving meal. I’m still full but those freshly baked cinnamon rolls sure seem to be calling my name.

In Elsa’s case, she prefers going au naturel in the snow even just for potty breaks. Licking off those ice balls takes time…time that she’s not pestering me to take her out again, so score one for me in the battle of wits. I’ll take a win over the Ninja any way I can.

We hope you are able to enjoy some form of nature this weekend. Hunting for for Black Friday bargains isn’t quite the same as hunting for beauty Mother Nature displays. Have a safe and happy weekend!